Bloomberg News reported state-owned Emirates, the leading airline in the Middle East, was in “preliminary” talks to take over Etihad — a move that would potentially create the world’s largest airline in terms of passenger traffic.

Contacted by AFP, Emirates and Etihad denied the report, with spokespeople for both airlines saying there was no truth to the “rumour”.

Etihad Airlines, based in Abu Dhabi, has battled to break even. The company announced losses of $1.87 billion last year, linked to its partial purchase of Alitalia.

Emirates in May reported its net profits had more than doubled in 2017, linked mainly to a rise in cargo as well as the layoff of some 3,000 employees. 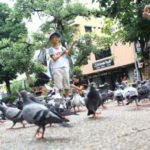