An elderly Chaiyaphum man was allegedly hacked to death Wednesday by a homeless man he gave food and shelter to out of sympathy, police said.

Narong Saenkhayun, 62, who lived alone, suffered fatal injuries to his head and died in his hut at a rice field in Ban Na Sida in Tambon Ban Dua of Chaiyaphum’s Kaset Somboon district.

Neighbours said they heard Narong quarrel with the homeless man, who was later identified as Arthit Dasuchung, in the evening before his body was found at night.

Police caught Arthit later, walking in the area with a cleaver in his hand. They said he was a drug addict who was too high on methamphetamine to be interviewed.

Although he had no ID, Arthit was estimated to be about 28 years old.

Neighbours said Narong recently provided shelter and food for Arthit out of sympathy. 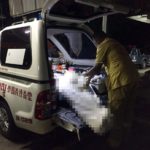