This viral story was reported by Korea Times and was shared on Facebook by a famous page in Thailand called “Drama-addict”. Where The page posted a caption explaining a summary of the story that stated “A drunk Thai in Korea had become drunk after drinking, he then climbed tripled walls each at the height of 2 meters into a heavy regulated zone of the Korean Military Airforce. He was able to avoid all of the security, including all the CCTV cameras. He was finally captured after successfully entering inside the Airforce. He later stated to the police that he was just cutting through the Airforce to get to a friends house as it was a shortcut to the usual route”.

The Korean Times reported in their article that the Thai man appeared extremely intoxicated while being caught on the 19th of December this year. The Air Force was located in Suwon, Gyeonggi province belonging to the Republic of Korea Air Force that had a triple-wall security system. The first wall had a barbed wire fence, the second wall was a security fence, and then the last wall was also barbed with wire as it was the closest gate to the airfield. All of the fences are at least 2 meters high. This Airforce is reported to be extremely top secret due to the fact that this is where the South Korean fighter jets are stored along with military activities.

After the man was caught, the inside officials of the Air Force respectfully handed the intoxicated man to the Suwon police. After inspecting the drunk man, he told the police two reasonings to why he broke into the Airforce. The first is that he was being chased and the second reasoning is that the Airforce was a closer shortcut to his friends home.

What doesn’t make sense is to how he was able to avoid all the military security guards and the CCTV cameras. Because of this, the police believe that there must be at least one accomplice who was in on the plan with the man who appeared to be drunk. The police later published an arrest warrant for the man based on the infringements against the Military Installation and Military Facilities Protection Act of the Republic of Korea.

Many have commented on the post in Drama-addicts page including, Natee T. stated: “I accept you as a spy, you can begin as soon as you get over the hangover”. Nuttanon P. stated: “South Korea, you have to check your whole security system, imagine what would happen if it was a real spy”. Somsong C. stated: “He must have gone in the retrieve the airdrop (Pubg game reference). 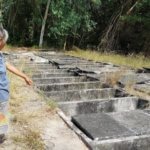