A 52-year-old man found to be under the influence of alcohol was detained on Sunday for allegedly damaging his ballot in Samut Songkram province.

Sukul Chunting of Muang district, however, said he had accidentally damaged the ballot because he was heavily drunk.

Sukul showed up to exercise his right at a polling station in the province’s Muang district but after he received the ballot and was about to vote, he reportedly damaged it.

He was brought to Muang Samut Songkram Police Station and a blood test on him found the alcohol level in his blood as high as of 258 milligrams per cent.

He told police that he had started drinking at 5pm on Saturday and drank throughout the night. “I was opening the ballot paper when I accidentally damaged it as my hands were shaking. I had no intention to damage it,” he said. He was charged with damaging the ballot, the punishment for which is a jail term of not more than five years and a fine not exceeding Bt100,000. If found guilty, he could also lose his voting rights for 10 years. 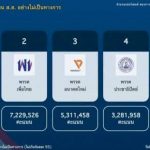