Tipped off by an informant, the team was staking out a border road location in Ai district when the pickup approached at high speed.

The ensuing chase ended first in Ban Pakui, Tambon Tha Don, but the suspects refused to leave their vehicle and instead sped off.

The pickup was driven into a corn field and abandoned, with the drugs left behind in four bags. 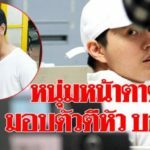