Two men and a woman almost toppled into oncoming traffic as they brawled and threw punches on the hard shoulder of the M20.

A video filmed by a passerby shows the two men sizing each other up before launching at each other while the woman shouts expletives.

Horns blared as the trio almost fell into the outside lane between the junction for Blue Bell Hill and the Maidstone turn off in Kent.

The video begins with one man, who appears to be unknown to those fighting, sprinting over and yelling: ‘Keep your hands up I want to see fair play.’

The woman then asks ‘who are you?’ to which he responds that he is keen to adjudicate proceedings.

A Range Rover and van can be seen parked up by the side of the coast-bound carriageway, while another man can be seen witnessing the fight.

The two men start grappling each other as the cameraman shouts ‘there’s a car mate’ before the woman steps in between the two fighters.

The man who she appears to be with takes a breather in his car.

The woman squares up to the other and tells him: ‘F**k off, get in your car.’

But the scuffle continues with more punches hurled as the woman shouts ‘smash him babe, go on’.

At one point the cameraman gives one of the combatants a pep talk saying ‘Fair play, you’re doing him.. you’re winning bruv, his nose is bleeding’.

The man, whose shirt was ripped in the encounter and by this point has been removed, then tells his rival to ‘come meet me somewhere else when it ain’t [sic] on the motorway’.

Footage of the incident, which happened last week, has been viewed thousands of times on Facebook.

It is thought the fight was caused by a business dispute, Kent Online reports.

Kent Police have been contacted for further information. 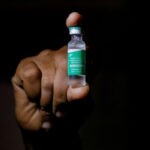 Millions ‘could be banned from holidays over Indian-made AstraZeneca jab 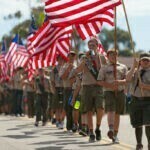