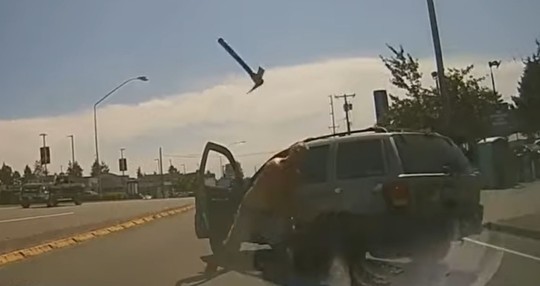 An enraged driver has been caught on camera hurling an axe at a female driver’s windshield in a dramatic act of road rage.

The unidentified man, 47, fled the scene after launching the potentially deadly blade at the woman’s car in Seattle, Washington.

Footage of the incident, which was filmed on the victim’s dash cam, shows the suspect, driving a Jeep, slam on the breaks before exiting the vehicle and forcefully throwing the axe at the woman’s car.

According to police the driver became angry at the unidentified woman for unknown reasons and began honking his horn at her, before following her.

The victim apparently took an earlier exit in an unsuccessful effort to avoid him.

When the man caught up with her, that’s when police say he took the drastic decision to launch the axe at his fellow motorist.

The suspect then fled the scene, Q13 Fox reports.

The same driver is also accused of shouting threats and racial slurs at another man a few days after this confrontation.

The incident took place last month and police say that a theft at a Home Depot store shortly after was linked to the same suspect.

The man has since been arrested and police say they used security footage from the store to help track him down.

He is now facing charges including felony hate crime and theft. 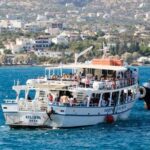 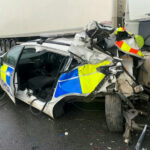