A man is in hospital after an 18-wheeler trailer truck loaded with soybeans lost control and fell on top of a passing car in Bangkok’s Lat Krabang district on Sunday afternoon.

Police and rescue workers rushed to the scene on Pracha Wattana Road’s Wat Pol Manee curve in Thab Yao sub-district at 1.30pm to find the truck lying on its side and on top of the crushed sedan.

While traffic police blocked the road to enable them to rescue the car driver, rescue workers used tools to cut open the wrecked sedan car and free the drier.

He was then stretchered off and taken by ambulance to hospital. Neither his injuries or condition were immediately clear, although he was conscious and able to speak to his rescuers as they took him away.

Truck driver Narong Wongpen, 33, who walked free unhurt, said the truck was carrying 46 tonnes of soybeans and he was driving at under 40km per hour when a motorcycle suddenly cut in front of him.

He had turned sharply to the right to avoid a collision, he said, resulting in losing control of his vehicle and not being able to stop it falling on top of the car. 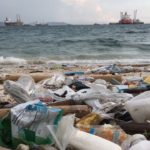