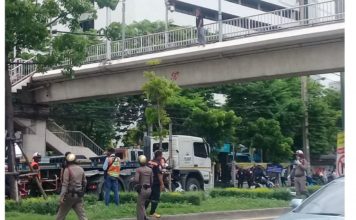 Drama as Thai woman threatens suicide from a 20ft bridge

A woman, who apparently had a mental-health disorder, was rescued after she threatened to jump from a pedestrian bridge in front of the Criminal Court in Bangkok’s Chatuchak district on Thursday.

The Phaholyothin police were told that a woman was standing on the ledge of the bridge and threatening to jump.

Police and members the Poh Teck Tung Foundation found the 45-year-old woman standing outside the fence while holding the fence with both hands.

Col Chettha Sawangsuk, commander of Phaholyothin police, said the woman sounded confused, like she had a mental-health disorder.

She claimed police planted drugs on her and raised a false drugs charge.

Police closed the lane below and spent about half an hour trying to convince her to climb back.

A policeman and rescuer eventually grabbed her.

Chettha said she did not face any drug charges but she had faced three theft charges in 2013.

She was sent to a hospital to be evaluated by a psychiatrist before police decided whether to press charges for wasting everybody’s time. 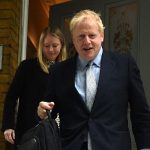 Brexit Boris heads to No 10 after LANDSLIDE first round win 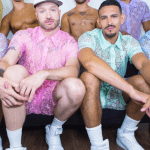