30 Sambuca: A video has emerged that shows a British tourist downing what looks like 30 shots of Sambuca in a minute in order to win a prize of – you’ve guessed it – booze.

Twenty-year-old holidaymaker Chris McAdam was in Zante, Greece, in a bar when he claims bar staff said to him that they wouldn’t have to pay the bill if he could neck the huge amount of strong liquor.

McAdam, from Swansea, agreed to take on the challenge. 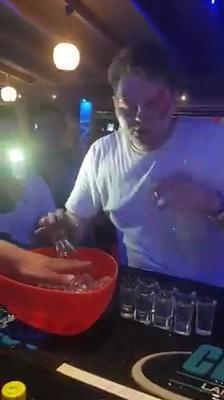 He later said that he puked up afterwards, but also admitted that he has done a fair amount of ‘training’ for this particular test.

He told the sun “I was sick a couple of times after, but I drink Sambuca on my nights back home in Swansea, so it’s a drink I can handle.

“The barmaid said, ‘If you can do 30 Sambucas in 90 seconds you won’t have to pay the bill,’ which was 25 euros. I felt fine afterwards – I’ve felt worse at home on nights out.” 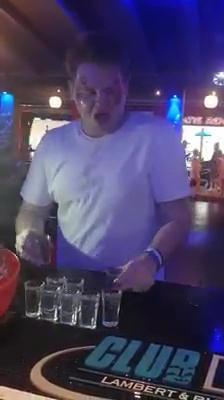 Obviously, drinking this much – particularly in one go – is not really a good idea. It’s always worth staying well within your limits when it comes to drinking.

The bar that offered the challenge out to McAdam has come in for a great deal of criticism from people who suggest that drinking such an amount of potent alcohol could have killed him.

McAdam, who works in McDonald’s when he is at home, is reported to weigh about 16 stone. Drinking 30 shots of Sambuca could probably floor a horse, let alone a 20-year-old man.

Naturally, some people think that it’s not real, and that he was actually necking water, but the bar commented on a Facebook post of the video – which has been viewed more than 600,000 times – to say that ‘it really is Sambuca not water’.

Well, if they say so. 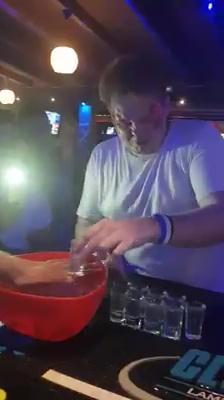 The manager of the bar, Sylvia, also spoke with the Sun. She said: “No one has done our challenge with Sambuca before. I kept him for three hours in the bar to make sure he was OK.

“He’s an adult and can ask for what he wants. We can’t force him to do it.”

This is true, but maybe it’s worth considering that the same can’t be said for the decision-making of someone who’s got 30 shots of Sambuca inside them.

Hereditary Has Been Scientifically Proven As The Scariest Movie Of 2018