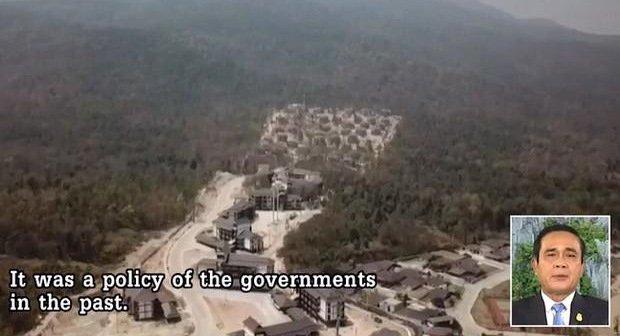 BANGKOK: The Ministry of Natural Resources and Environment says it stands ready to regrow forest in the area where the controversial housing project for judicial officials is situated at the foot of Doi Suthep following the government’s decision to return the area to the national park.

Minister Surasak Karnjanarat said seedlings have already been prepared for the reforestation which would be done ahead of the coming rainy season.

The seedlings are of trees native to the area, including balau, iron wood, Burmese sal and pradoo, he said, adding 1,600 big trees and 4,000 seedlings have been prepared.

Vetiver grass and other ground-cover plants will be grown in the area while 110 small weirs would be built.

The reforestation will begin on May 27, he said, adding the event would take place two days before the National Tree Day, when people would be urged to grow trees countrywide.

Gen Surasak said the ministry will also ask the Cabinet to approve the community forest bill at its mobile meeting in the Northeast today (May 8).

The legislation would enable the locals to play an active part in taking care of forest land.

People have been waiting for the bill for more than 10 years and the current administration will try to push it through, he noted.

On Sunday (May 6), the government agreed that the area where the 45 houses and nine flats are being built under the project will no longer be zoned for residential use.

The plot will be returned to its original owner, the Doi Suthep-Pui National Park, said Prime Minister’s Office Minister Suwaphan Tanyuvardhana, who attended the meeting on Sunday.

A clear boundary will be drawn separating the plot to be returned to the park from the area allowed to be used for the regional appeal court.

According to the minister, a committee comprising government and local leaders will be formed to decide what to do with the houses and flats.

The participants agreed to set up two committees – one responsible for reforestation and another for dealing with building structures in the area.

After the project’s construction contractor completes its work in June, the area would be handed to the Treasury Department the following month.

The land would then be handed over to the National Parks, Wildlife and Plant Conservation Department (DNP), a source said.

Pattaya drugs party gets unwelcome visitor – the chief of police!