Sky gazers camping out Doi Inthanon mountaintop in Chiang Mai were treated to a spectacular show by the Geminid meteor shower overnight on Thursday-Friday.

Dr. Saran Posayajinda National Astronomical Research Institute of Thailand said the meteor shower started at about 8.30pm in the northeastern sky where the Gemini constellation is located. The meteors became more frequent after midnight, reaching 200 meteors per hour in one of the largest Geminid displays in recent history.

Saran said his institute received cooperation from the Doi Inthanon Park to organise a special field trip of over 100 tourists to wait in a 9-degree Celsius chill for the “shooting star” show to begin. Saran’s institute also held Geminid meteor watches at the Nakhon Ratchasima Observatory, Chachoengsao Observatory and a public viewpoint ground at Samilar Beach in Songklha.

Several schools in 77 provinces also held Geminids watching activities after receiving telescopes from the institute. In Chachoengsao, about 1,000 people, mostly from Bangkok, gathered at the Chachoengsao Observatory to watch the meteor showers.

Worawit Tanwutthibanthi, an advisor for the observatory, said about 80 meteors were seen per hour at the observatory at the peak of the phenomenon.  Source: Asia Nation 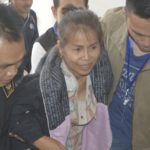