Dogs are commonly known to be a bit dopey – I mean, how many times have you pretended to throw the ball for your family dog for the poor thing to sprint down the garden only to discover it’s still in your hand? Well, a recent study has found dogs may be smarter than we think.

It turns out our beloved four-legged friends can do basic maths and understand the concept of ‘more’ and ‘less’.

In the study, dogs were trained to lie still in an MRI scanner before having their responses to different numbers of dots flashing on the screen measured.

The researchers found the dogs’ parietotemporal cortex responded to differences in the number of dots – which is a scientific way of saying they recognized four dots is different to two dots, for example.

It follows, then, that if your pup saw you had four treats in your hand and after giving them one you said they were all gone, your dog would (apparently) know there are actually some left and so probably kick up a fuss.

The study used 11 dogs of varying breeds –  including border collies, pitbull mixes, and Labrador golden retriever mixes – that had not received any advanced training in numerosity. Eight of them showed greater activation in the parietotemporal cortex when the ratio between alternating dot arrays was more dissimilar than when the numerical values were constant.

The study is likely to be of interest to dog trainers, as it suggests dogs pay more attention to the number of items – as a reward, for example – than other factors.

Gregory Berns, a neuroscientist at Emory University in Atlanta, conducted the study with his colleagues.

Berns has conducted previous studies on dogs and released a couple of books on them, named How Dogs Love Us and What It’s Like to Be a Dog.

In an interview with Psychology Today about his book What It’s Like to Be a Dog, Berns said:

The overarching theme is that we see startling similarities in how animals’ brains function. This means that all animals — whether dog or human — have many neural processes in common.

So when we see the same part of a dog’s brain active as a human’s under similar conditions, the implication is that the dog is experiencing something very similar to us. Also, just like humans, we see tremendous variation in these responses from one dog to another. This means that dogs, like humans, are INDIVIDUALS.

Woman, 19, Facing Life In Prison After Killing Man Who ‘Raped And Sold Her For Sex’ 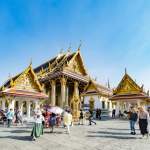 Laws in Thailand: How to Stay Out of Jail