The Labour Minister has given orders for the families of two Thai migrant workers who died this month while legally employed in Israel to be given all the compensation and welfare benefits to which they’re entitled.

On the line with him were Monchai Dechapol, chief of the labour office in Nakhon Phanom, and Apichat Wongkalasin, who heads the employment office in that province.

Both men who died hailed from Nakhon Phanom and worked on farms in Israel. They died of heart failure just two days apart.

Natthachai Pongsao, 32, died on August 3 and Pornchai Phromchan, 43, died on August 5, according to the Minister-Counsellor for Labour at the Royal Thai Embassy in Tel Aviv.

The flight bringing their bodies home was due to land at Suvarnahumi International Airport on Friday afternoon and the Labour Ministry has arranged for transport to their home province.

Natthachai’s relatives will receive Bt95,000 as his final month’s salary plus overdue pay, Bt40,000 in compensation from a fund for Thais working abroad, Bt10,176 from the Social Security Office, and Bt55,000 from the village funeral fund.

His healthcare insurance will cover all transportation costs.

Pornchai’s kin will receive Bt95,000 in salary and overdue pay and Bt40,000 from the overseas workers’ fund. Transportation costs for his remains will also be fully covered.

Both men were also each entitled to a Bt15,000 from a village assistance fund.

They thanked the officials involved and advised anyone considering overseas work to proceed legally so they would be financially covered in the event of mishap. 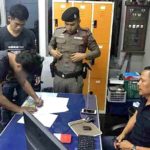