Home » Dead tourist is washed up on Pattaya Beach

A dead tourist was found washed up on Pattaya beach opposite Soi 5 the other day.

He was about 175 centimeters tall, had no injuries on his body and had been dead 3-4 hours.

He looked like a Chinese tourist but there was no ID on the body so police are appealing for help.

Curiously there was nothing on him to suggest he was a tourist either, perhaps a long term ex-pat.

The body was found by Somchai, 60, who realized he was dead and immediately called police.

Police are unsure if the cause was suicide or drowning though they noted there were high waves in the area yesterday.

The body has been taken to Bang Lamung Hospital. 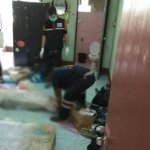 16-year-old prostitute is murdered in Pattaya

Thailand has the greatest wealth gap in the world