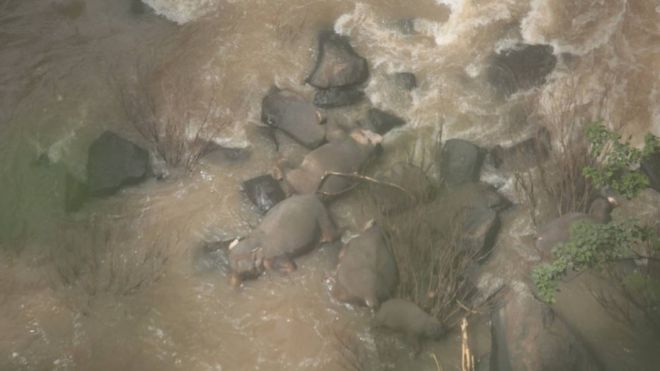 Officials are trying to retrieve the bodies of six elephants that fell to their deaths while trying to save each other from a waterfall in Thailand, warning that they pose a water contamination risk.

Khao Yai National Park officers have set up a net downstream from the bodies to stop them from reaching a major dam.

The elephants died after falling from a notorious waterfall known as Haew Narok (Hell’s Fall).

Two others were rescued on Saturday.

Thailand’s Department of National Parks, Wildlife and Plant Conservation (DNP) said officials were called to the scene on Saturday at 03:00 local time (20:00 GMT on Friday) when a group of elephants was seen blocking a road by the waterfall.

Three hours later, the body of a three-year-old elephant was spotted near the base of Haew Narok, and five others were discovered nearby.

The two surviving elephants were found struggling on a rock. A park official told the BBC on Monday that officers had been monitoring their tracks and were confident they were safe, but experts have warned that their long-term survival may be difficult as elephants rely on large herds for protection and finding food.

“The next mission is how to take the carcasses from the river. Six of them are still in the river and the river is very strong now,” the official said.

“We are using rope across the river and have a lot of people helping together to retrieve the carcasses.”

Edwin Wiek, founder of Wildlife Friends Foundation Thailand, told the BBC the rescuers “hope to get the carcasses to an area where they can lift them with a backhoe (an excavating digger) and bury them there.”

“The decomposing bodies will be too smelly and spread of disease is a concern,” he added.

Saturday’s incident is not the first of its kind at Haew Narok. A herd of eight elephants died after falling from the waterfall in 1992, in a case that brought national attention.

Officials are now seeking to prevent further incidents from happening in the future.

Natural Resources and Environment Minister Varawut Silpa-archa has ordered the construction of a barricade to stop animals from falling into the waterfall and called for food banks to be set up around the park in an effort to prevent food scarcity which can cause animals to approach dangerous spots, according to the Bangkok Post. 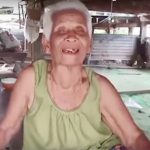 82 year old Granny died and came back to life

Thais claim thousands of WOMEN are ‘victims of foreigners’