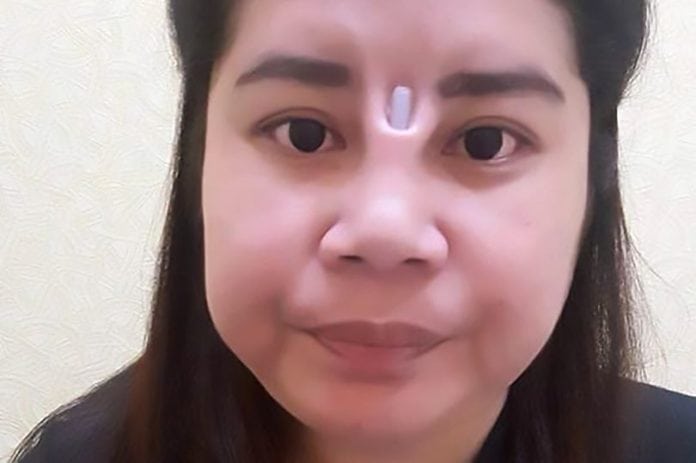 Cut Price Cosmetic Surgery: A woman was left with a crater in her face after the silicone implant from a botched nose job burst out of her skin in Thailand.

The woman had reportedly opted for a cut-price rhinoplasty at a clinic that later refused to help.

Following the procedure intended to give her a more pronounced nose, the woman began suffering from infections and later inflammation around the area of her face where the surgery had taken place.

Shockingly, the silicone implant began to reveal itself from the top of her damaged nose, between her eyes.

The unnamed woman’s procedure was carried out at a clinic in the Thai city of Hat Yai and she shared pictures of her ordeal on social media afterwards.

She sought out medical professionals near Thailand’s capital Bangkok, where one plastic surgery hospital is said to have provided her with pro bono treatment to have the implant removed.

Pictures show the woman’s nose now left with a crater where the silicone implant used to be.

It is still unclear how medics plan to repair her botched rhinoplasty.

Pictures of the woman’s harrowing experience have since gone viral on social media, with cosmetic surgery clinics across the country sharing the snaps as a warning to nose-job-hunting woman.

Reports did not name the woman’s plastic surgery clinic in Hat Yai but said the business “took no responsibility” and “refused to help her” after the extent of her condition was revealed.

It was not clear whether the patient planned to take legal action.