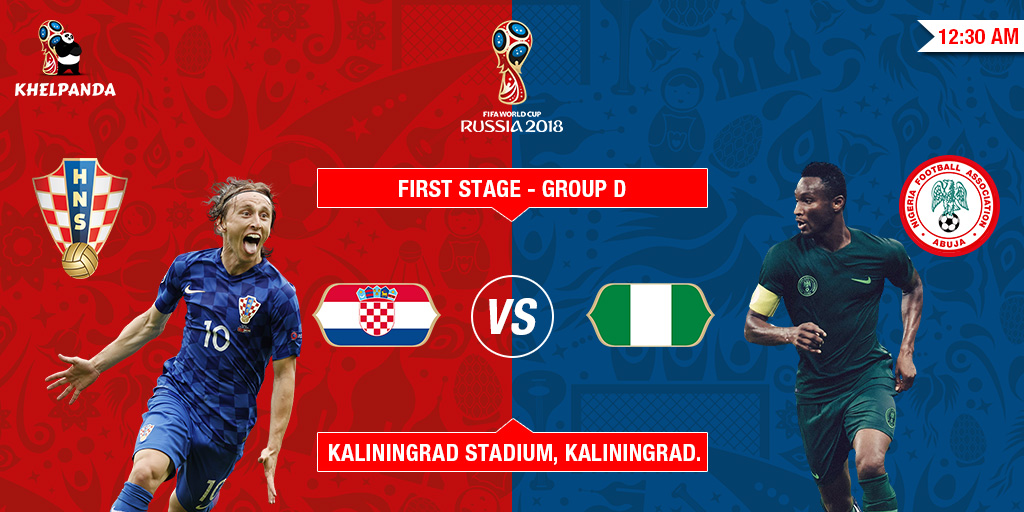 Croatia sit top of World Cup Group D after a comfortable 2-0 win over Nigeria in Kaliningrad on Saturday evening.

Zlatko Dalic’s side took the lead in fortunate circumstances when Mario Mandzukic’s 32nd-minute header from a Luka Modric corner was deflected into his own net by the unfortunate Oghenekaro Etebo.

Modric secured the win from the penalty spot 19 minutes from time after William Troost-Ekong needlessly fouled Mandzukic at a corner.

The result leaves Croatia in a strong position after the opening fixtures following Argentina’s 1-1 draw with Iceland earlier on Saturday.

Ivan Perisic’s 14th-minute sighter from the edge of the area fizzed over the bar and set the tone for a solid first-half display from Croatia which saw them dominate possession without creating chances – with their 32nd-minute lead arriving in fortuitous circumstances.

Modric’s left-wing corner was flicked on by Ante Rebic and headed on by Mandzukic. The ball looked to be heading wide, but cannoned off the back of the leg of Stoke City’s new £6m signing Etebo and into the net.

The own goal came despite there being no shots on target from either side in the first half, though the impressive Andrej Kramaric headed narrowly over the bar from an Ivan Rakitic ball shortly before half-time.

Ivan Strinic was given the nod at left-back for a Croatia side which featured star players Luka Modric, Ivan Rakitic, Ivan Perisic and Mario Mandzukic. Leicester midfielder Wilfried Ndidi was fit for Nigeria but club team-mate Kelechi Iheanacho was only a substitute as Odion Ighalo started up front.

Croatia should have doubled their lead when Rakitic played a sublime first-time pass to Perisic on the left and he found an unmarked Rebic in the six-yard box, but the forward volleyed high and wide when he looked certain to score.

However, the second goal came on 71 minutes when Ekong put both arms around Mandzukic from a Modric corner and the referee correctly pointed to the spot.

Modric struck low to the right of goalkeeper Francis Uzoho, who dived the wrong way, to settle a disappointing match and yet give Croatia the perfect start to their World Cup campaign.

Man of the Match – Luka Modric

In a game of little quality, the Real Madrid midfielder stood out throughout. Sitting in a deep midfield role, he spread long passes to his team-mates with stirring precision throughout the first half and calmly struck home the second-half penalty which put the game beyond Nigeria. If Croatia are to go deep in this tournament, their captain will surely be at the heart of things.

Croatia’s next test is against Argentina in Nizhny Novgorod on Thursday evening (7pm, UK time), while Nigeria’s second Group D clash is on Friday afternoon against Iceland in Volgograd at 4pm (UK time).

Video Update: This is the moment when a woman is cut from a 23 foot long python