Home » Crackdown on a major drug gang, seize assets worth about ฿100m

Anti-narcotics police announced the successful crackdown on a major drug trafficking gang today which has allegedly amassed assets worth about 100 million baht from the illicit drug trade.

Yesterday, police intercepted a van in the Uthai district of Ayutthaya province and seized seven million methamphetamine tablets. The van’s driver and an assistant were arrested. A third suspect, a cattle farmer, was subsequently apprehended in Chainat province.

Police said that the cattle farm was, in fact, a front used by the drug gang to store illicit substances, which were smuggled in from neighbouring countries using cattle trucks, before they were to be distributed to other provinces.

Two ten-wheel and a six-wheel truck, five pickup trucks and a motorcycle were found at the farm and impounded, along with three land title deeds worth a combined 11.7 million baht.

Police also said that they have arrested two more suspects, a man and a woman, and seized seven cars, including a few sports cars, and other assets worth about 100 million baht from what is known as the “SN77” gang.

The crackdown on the gang is the result of an ongoing investigation, with the help of big data systems, dating back about five years.

According to the deputy national police chief, Pol Gen Roy Ingkapairote, police and anti-money laundering officials have seized more than 5 billion baht in assets from various drug gangs in the past year. 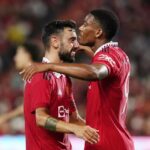 Ten Hag Off To Perfect Start 4-0