Two men have been charged with assault after they allegedly attacked two Chinese tourists following an argument on a speedboat on Wednesday.

Police interviewed the tourists at Vachira Hospital in Phuket to gather evidence. Lyu Jinlin, 38, sustained head injuries and his leg was hit with a wooden stick. Lin Jianei, 45, has serious ear injuries where he was struck by a bottle. His legs were also scratched.

Maj Eakkachai Siri of the Phuket Tourist Police said: “They arrived at Krabi International Airport on June 10. Yesterday they took a tour to Koh Phi Phi and departed from a pier at Koh Sirey in the morning.

“They put their bags on a seat. A Thai family who were on the same speedboat told them twice to remove their bags from the seat. The tourists told them ‘they had no need to shout’ before they removed their bags off the seat. The Thais later attacked them, according to the report.”

Liayaoyi told police he was arguing with the two tourists about putting bags on the boat seat. When the speedboat arrived at Phuket pier in the afternoon, the argument continued. He claims the tourists used a wooden stick to hit him first. After that Siri and Pam, who are Liayaoyi‘s friends, saw what was happening and tried to help him. 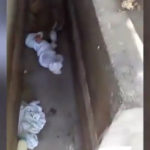 Video:A mother leaves a 2 month old baby to die in a Philippines Cemetery.