The 35-year-old Thanawat, who was also ordered to report to the court again on September 24, said he would resume his work of selling lottery tickets after the release.

The vendor was last week praised as the most honest of lottery vendors for honouring a customer’s purchase of a ticket that won the lottery first prize of Bt90 million, even though it had been bought through the Line messaging app. On Monday, however, he was branded a swindler after it was found that neither the “winning” ticket nor his lucky customer had ever existed.

Thanawat dismissed as untrue the accusation brought by Atchariya Ruangratanapong, a lawyer and chairman of the Facebook group for assisting crime victims, that Thanawat had at least four accomplices.

Thanawat said his girlfriend, his younger sister and two other lottery distributors had nothing to do with this action – which has now caused him to face four charges of fraud, violation of the Computer Crime Act, selling overpriced tickets along with document forgery over the lottery ticket photo alteration. 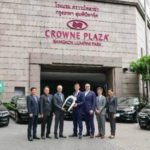