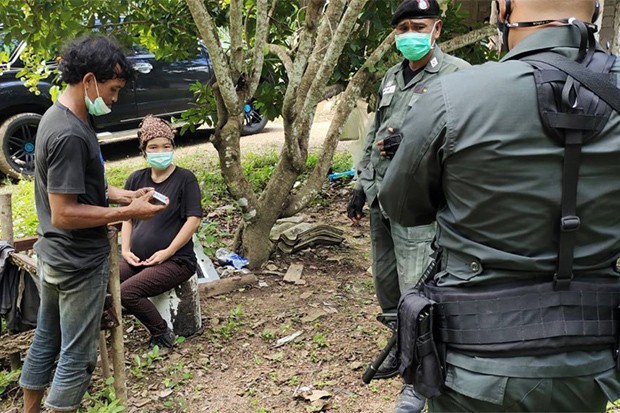 A Thai man and his five-months-pregnant wife were caught after scaling a wall to cross the border illegally from Malaysia and re-enter Thailand, in Sadao district, in the early hours of Monday.

They were arrested by soldiers from Infantry Company 5021, which patrols the border in Sadao district.

He said they used a ladder to scale over the concrete wall near demarcation post No 8/69 at Ban Talo in tambon Padang Besar of Sadao district about 12.30pm. They were spotted by the village chief, who informed a patrol unit.

They were checked for outward signs of Covd-19 infection and then questioned.

The couple said they went to Malaysia two years ago to work as rubber tappers at a village in Perlis State.

Three days ago Ms Saichol became unwell due to her pregnancy. On Monday morning, they paid a Malaysian 3,000 baht to take them by car to the border.

Mr Anucha said they were returning to their home in Satun province, where his wife would give birth to their child.

The couple were charged with illegal entry and then taken to undergo a full Covid-19 screening process.

Anucha Yaprachan (left) and his pregnant wife Saichol Longsalam (seated) on Monday, after their arrest in Sadao district of Songkhla early in the morning. They entered Thailand illegally from Malaysia by climbing over a wall. (Photo: Assawin Pakkawan) 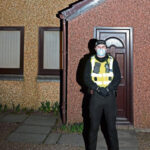 Wife’s corpse in duvet & kept in house for 12 years