DEATH RACE: Last week a driving instructor from the Land Transport Department was asked why there is no special license required to ride big motorbikes.

Big bikes are motorcycles with 500cc engines or larger, and are very powerful beasts that can be difficult to control in unexpected road situations.

His answer was that the government would face strong resistance, particularly from influential motorcycle vendors, making it impossible to push through such a license – which exists in more safety-conscious societies such as Japan.

Don’t get him wrong. This veteran instructor, whose job is to represent the department in giving five-hour theory lectures to Thai students wanting to obtain driver’s licenses, believes there’s a need for a special license for big bike owners.

But he’s resigned to the scenario that this will only happen after big bike-related death tolls become so evident and appalling that there’s enough public outcry to push legislation through.

The more gory involved a 23-year-old biker who raced to his death after apparently hitting a concrete curve at Yommaraj Bridge in Bangkok. The rider was thrown off the bike and hit a rail – his body was nearly cut in two and his intestines burst from his abdomen, splattering across the asphalt.

There is nothing wrong with big bikes, it’s just that one ought to be especially skilled to control such powerful beasts with close to – or even over – 100cc horsepower.

Ordinary bikes can be a menace too, particularly in Thailand where riding on footpaths to evade traffic jams is common.

People still seemed to have no qualms until Monday – less than 14 hours after the first big bike death – a 16-year-old secondary school girl in uniform was hospitalized after a motorcycle struck her on a sidewalk in Bangkok’s Lat Phrao area.

Riding bikes on the sidewalk is definitely illegal – but absolutely common in Thailand, where the number of deaths due to traffic accidents are among the highest in the world. It exemplifies the serious lack of law enforcement and safety.

Even if enforced, the Bangkok Metropolitan Administration would only fine the offending biker, 23-year-old Phuwadon Srisamrong, 500 baht. After an “uproar,” City Hall on Wednesday raised the fine to 1,000 baht.

The World Atlas website has Thailand’s roads the second most deadliest in the world behind Libya, with about 22,000 killed in 2016. That’s more than 50 people killed every day.It’s like watching a never-ending, slow-motion train wreck – except it actually happens quite fast.

And society just accepts it a fated inevitability.

You can literally check the real-time body count at Thai Road Safety Culture. It has 42 people killed Friday, with 3,047 injured. Eighteen have died since this morning and the time this column was published before noon.

Where is the real uproar? Where is the commitment to really do something about the tens of thousands killed every year? we really don’t see it and would be surprised if any of the political parties now competing can offer anything comprehensive and achievable. 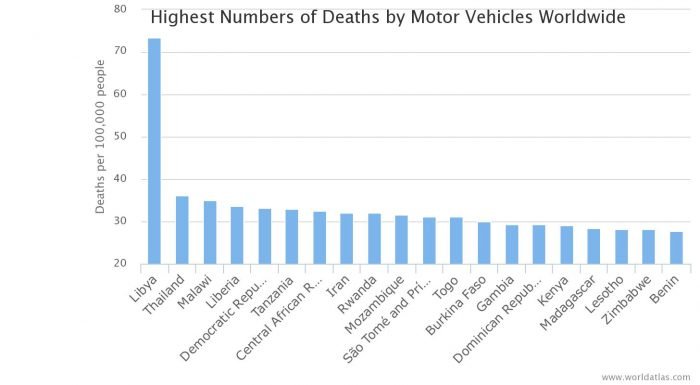 Significantly reducing traffic-related deaths ought to be the national agenda of any government. Things such as the fact that driving license tests don’t include assessing ability on real road conditions ought to be reconsidered. The 10-hour mandatory field driving lessons ought to also be lengthened to 15 or 20 hours like in some other countries.

Alas, it seems Thai society has gotten too used to it – to the point where many merely accept road deaths as an unalterable fact of life – just like the official driving instructor, who believes only an uproar produced by the mounting traffic death toll could change the law.