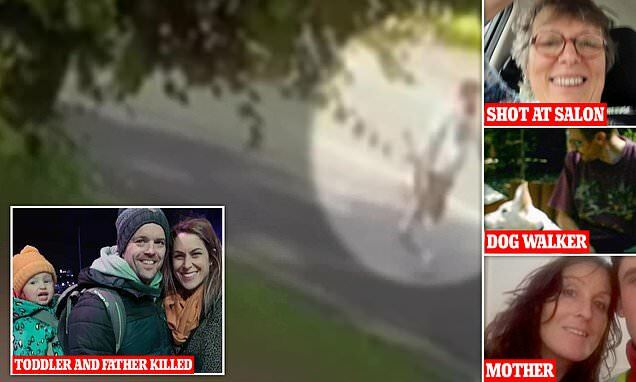 The 22-year-old killed five people, including his own mother and a three-year-old girl, before turning the gun on himself on Thursday evening.

A video revealed by ITV shows the killer calmly sauntering across the road with a shotgun in his right hand.

Moments earlier, Davison shot his mum Maxine in her own home before going outside and randomly killing little Sophie Martyn, 3, and her dad Lee, 43.

Two witnesses, Ben Parsonage, 33, and his mum Michelle, 53, ran out to try and help Sophie and Lee but Davison shot them too. Thankfully they survived but will have to heal from ‘significant’ injuries.

Davison then walked out of the cul-de-sac this had all happened in and told a shocked local: ‘Nothing to worry about here mate’ before killing dog walker Stephen Washington, 59.

It is after this point that the eerie CCTV footage takes place – as Davison heads to kill his last victim, Kate Shepherd, 66.

The video shows him walking across the road diagonally, in shorts and a T-shirt, as a green car passes him.

Davison, who is still holding his shotgun in his hand the whole time, seems disturbingly unaffected by the four lives he has just taken.

The CCTV footage emerged as it was revealed that police had returned his shotgun to him last month after confiscating it in December following an accusation of assault – for which Davison was allegedly given an ‘anger management’ course.

His horrific actions tore apart a ‘perfect family’ when he killed Sophie Martyn and Lee – who died after being shot in the back while trying to shield his daughter.

Tributes for the two victims have poured in on Lee’s brother’s Facebook page, with locals calling Lee ‘a kind selfless gentleman’.

Lee and Sophie leave behind their wife and mum Beth – who is believed to be an intensive care nurse at the hospital where some of the shooting victims were taken.

In the weeks leading up to the attack, Davison posted hateful, misogynistic rants on Youtube revealing his affinity with the incel movement.

The violent online subculture is made up of ”involuntary celibates’ who feel slighted by society and women because they cannot find sexual partners. It has been linked to far-right acts of violence in the US in the past.

Campaigners are pushing for the police to brand incel murders an act of terrorism amid concern the women-hating ideology is gaining more popularity online.

The Everday Sexism Project said: ‘Repeated news reports, police and politicians all saying this is not terror-related.

‘This is shocking and shameful. Extremist misogyny, male supremacy, sees women die all over the world, including repeatedly in incel massacres. We cannot tackle it if we do not name it.’

Devon and Cornwall Police Chief Constable Shawn Sawyer told a press conference yesterday that there is ‘no motive as far as (the police) know at present’.

He said: ‘We are at the moment not considering terrorism or a relationship with any far-right group or any such other group. But clearly, he is on social media and that will be part of the investigation’

It all comes as several other troubling details continue to be revealed about the horrific tragedy.

Davison’s mum had begged the NHS to give her son help for mental health issues during the pandemic but this apparently went unanswered.

The Independent Office for Police Conduct (IOPC) have said it would be investigating Devon and Cornwall Police over Davison’s licence for a shotgun. 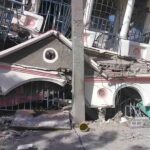