Eleven people were arrested in multiple raids in 10 provinces and charged with possession of child pornography with intent to distribute, police said on Friday.

He was speaking at a press conference to announce arrests of the suspects.

He said police were tipped off.

Each suspect could face up to five years in prison and/or be fined 100,000 baht if convicted, Pol Lt Gen Surachate said.

The suspects either secretly filmed them having sex with minors and sold the video clips to customers or recorded videos to blackmail victims, said Pol Maj Gen Thitawat Suriyachai, chief of the Cyber Crime Investigation Bureau’s Sub-Bureau 4.

Over the past year, about 100,000 similar cases have been committed, he said, adding police believe they are linked to human trafficking rings.

Nanta Waikakul, director of the Children and Youth Protection Division, said her division has been working to educate children on how to protect themselves from being targeted by criminals and provide shelter to victims. 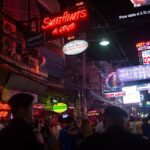