Chelsea Move Above Arsenal But Blow The Opportunity Of Grabbing Third Sport In Their Race For A Champions League Place. Match Highlights. Player Ratings. Manager Comments, And Stats.

After watching all their Champions League place rivals all suffer defeats Chelsea went into this game knowing that three points would see them in third place. But Burnley came to spoil the party and now Tottenham and Arsenal can go above them as they each have one game in hand. Manchester United also have a game in hand, tomorrow against Manchester City, and if they win that they will join Chelsea on 67 points. Chelsea have a six goals better goal difference than United.

The old Burnley, before they got involved with the Europa League, were known has habitual party spoilers. Sean Dyche would set his team up to do a Burnley and many times they did. This season it’s been different and when Chelsea visited Turf Moor at the end of October, back in the heart of Burnley’s European campaign, Chelsea beat the new Burnley 4-0.

During this time Turf Moor panic stations were in full swing as Dyche’s teams lost a lot of games between then and the end of the year. Their form started to improve at the start of 2019 with a draw at Manchester United and a home win against Tottenham before they blipped again and lost four in a row. Three wins followed that, plus the draw against Chelsea, and they now have the magic 40 points.

This game got off to a lively start and all four goals came in a 16 minute spell between eight and 24.

Burnley Jeff Hendrick. 8 Minutes: From a corner on Burnley’s right César Azpilicueta headed weakly out to the edge of his own box. Hendrick, with time and space, volleyed straight back into the net.

Chelsea N’Golo Kanté. 12 Minutes: Good work by Eden Hazzard on the left enabled him to find Kanté who hit high into the net with his left foot from 12 yards.

Chelsea Gonzalo Higuaín. 14 Minutes: Higuaín played a one-two with Azpilicueta and buried with his right foot from six yards.

Burnley Ashley Barnes. 24 Minutes: Burnley played a deep free-kick into Chelsea’s box where Ben Mee headed into the danger area from the back post. Chris Wood flicked on and Barnes, three yards out at the other post, volleyed home.

Maurizio Sarri sent off in the 94th minute after questioning Burnley’s time-wasting tactics, failed to attend the post-match press conference. Gianfranco Zola, stepping in for Sarri, commented that Sarri felt offended as well as frustrated.

Replaced in the 41st minute Callum Hudson-Odoi left the ground on crutches. He has an Achilles injury which might keep him out for the rest of the season and possibly longer.

Man of the match: Ben Mee 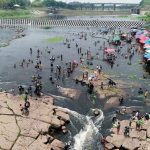