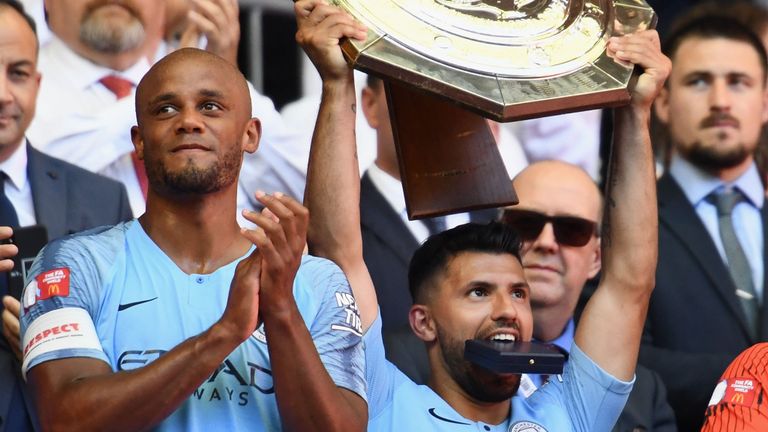 Sergio Aguero reached another milestone as Manchester City warmed up for their Premier League title defence with a convincing 2-0 win over Chelsea in the Community Shield at Wembley.

City’s all-time top scorer struck 13 minutes into the traditional curtain-raiser to reach 200 goals for the club and added another midway through the second half (58) to secure the silverware after a mismatch of a contest.

Pep Guardiola had spoken of his enduring motivation despite last season’s record-breaking campaign, and his champions bristled with energy even without several key men to leave Maurizio Sarri with plenty to ponder ahead of next weekend’s top-flight kick-off.

Riyad Mahrez, making his competitive City debut in the sunshine, sent a free-kick into the Chelsea wall and then threaded through a clever ball that Aguero failed to catch cleanly.

Man of the match: Bernardo Silva

But when Phil Foden was allowed to drive at goal, Aguero this time met his lay-off with a firm left boot.

Chelsea struggled for a foothold in the contest – Jorginho laboured against the side he nearly joined – and when the peripheral Alvaro Morata was let in by Kyle Walker’s poor touch, the Spaniard curled well off-target.

Riyad Mahrez was handed a competitive debut for Manchester City at Wembley but while England’s World Cup stars John Stones and Kyle Walker started, Raheem Sterling was not involved.

Maurizio Sarri named summer signing Jorginho in his side and gave starts to Ross Barkley and teenager Callum Hudson-Odoi.

The livelier Callum Hudson-Odoi followed suit the other side of a drinks break, before going closer with a shot Claudio Bravo parried, and the Chilean was sent scrambling after misjudging the bounce of a ball Marcos Alonso had launched from range.

Mahrez and Leroy Sane had spurned chances to extend City’s lead before the break with heavy touches and Aguero was wasteful soon after the restart, one tame shot followed by another into the side-netting after another smart Foden pass.

But his 201st goal – and City’s second – finally came just before the hour mark, John Stones sparking a counter-attack and Bernardo Silva playing a fine reverse pass for Aguero to this time finish.

Bravo’s fumble as a Ross Barkley ball spun dangerously almost earned Chelsea a late consolation but Willy Cabellero had to beat away efforts from Brahim Diaz and Gabriel Jesus to keep the score down and Sarri was left scribbling in his notebook as Guardiola tasted familiar success.

Man of the match – Bernardo Silva

Sergio Aguero was the matchwinner, his movement and link-up play catching the eye as well as his goals, while Phil Foden impressed with a string of incisive passes. Bernardo Silva was City’s best player in the first half, though, and the smart ball for Aguero’s second typified a performance full of craft and guile.

The big Premier League kick-off. Sarri’s new Chelsea start at Huddersfield, while the defending champions travel to Arsenal on the first Super Sunday of the season.