CHAINAT COVERED BY FOG TO FOLLOW UP WITH 2C to 4C

The upper central province of Chainat was covered in a white winter fog Tuesday morning as the average temperature in all eight districts dropped to 16 degrees Celsius.

Officials and local residents said temperatures on the hills in the province was about 14C.

Motorists had to drive with their fog lights on as the thick fog in the morning resulted in poor visibility.

Pramote On-nom, the director of the Chainat Meteorological Office, said local people should be prepared for further temperature drops by about 2C to 4C this week.   Source: Asia Nation 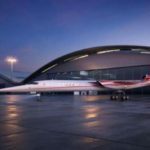 Supersonic jet maker gets big shot in the arm

BANGKOK RESIDENTS WRAP UP DUE TO 16 C