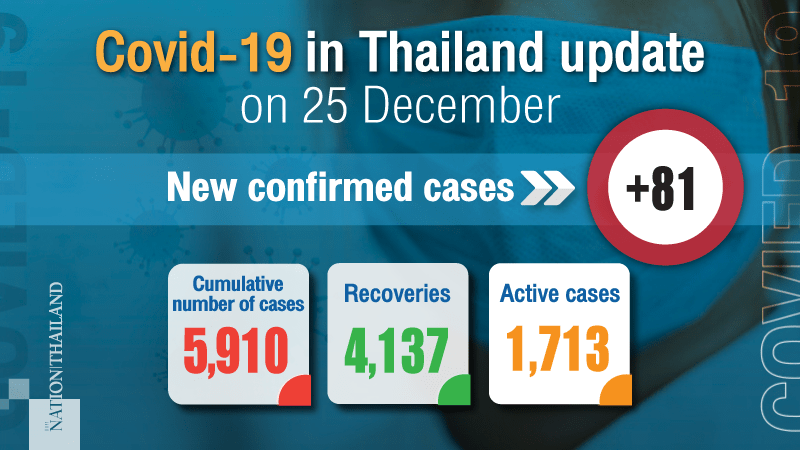 The Centre for Covid-19 Situation Administration (CCSA) reported 81 new cases over a 24-hour period on Friday.

Of the 81, 37 were domestic cases, with 26 patients linked directly to the Samut Sakhon cluster, 11 yet to be confirmed and 35 migrant workers who tested positive as part of a proactive Covid-19 search operation. Most of the workers who have tested positive are asymptomatic.

Separately, six Thais and three foreigners who have recently entered the country tested positive in quarantine.

Meanwhile, 21 patients have recovered and been discharged.

The total number of confirmed cases in Thailand has risen to 5,910 (1,943 returnees and 1,308 found domestically), 1,713 of whom are in hospital or ad-hoc quarantine facilities, while 4,137 have recovered and been discharged. The death toll remains unchanged at 60.

CCSA spokesperson Dr Taweesin Visanuyothin said as part of the search for active cases, 8,810 people have been tested so far and 1,308 found infected, accounting for a 15-per-cent positive rate. Of this group, three patients are at risk – two are suffering from severe diarrhoea and one is a pregnant woman close to delivery.

As for Samut Sakhon locals who are against the setting up of a field hospital, he said there are enough personnel and security officials to ensure the safety of communities around the site.

As for panic over seafood from Samut Sakhon, he said he wants people to calm down because many provinces have temporarily stopped the movement of products, though seafood can be safely consumed provided it is cooked properly in line with good hygiene guidelines. 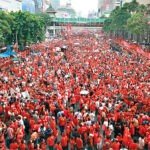 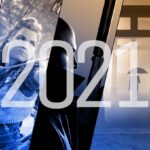