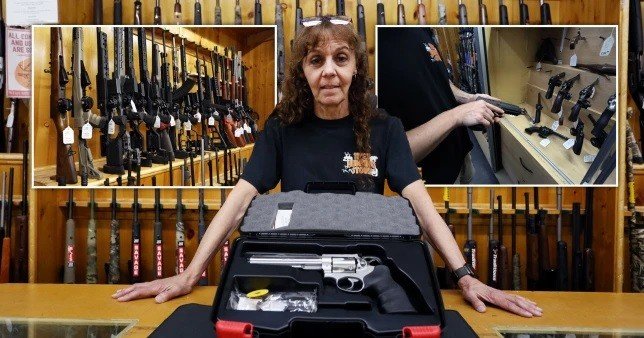 Canadians have flocked to gun stores this week, after Prime Minister Justin Trudeau proposed a freeze on the sale of handguns following the mass shooting in Texas last month.

If approved, the plans are expected to come into force in the autumn, and come after a ban on assault-style firearms in May 2020.

Mr Trudeau said: ‘One Canadian killed by gun violence is one too many. I’ve seen all too well the tragic cost that gun violence has in our communities across the country.

‘We’re proposing some of the strongest measures in Canadian history to keep guns out of our communities and build a safer future for everyone.’

However, while the regulations are yet to pass through the country’s parliament, people have been seen rushing to buy weapons ahead of the potential freeze.

Aman Sandhu, of the Dawson Creek Sportsman’s Club, said: ‘I’m concerned that if I don’t buy one now, I may never have the choice again.’

The agency reports there were lines out of the door of gun shops ‘within hours’ of the PM’s announcement on Monday, while others have been said to have sold out of weapons ‘within days’.

Jen Lavigne, co-owner of That Hunting Store in Ottawa, said ‘sales have been brisk’ following news of the government’s plans.

She said: ‘We sold 100 handguns, or almost our entire stock, in the last three days since the prime minister announced the freeze.

‘This measure is only going to hurt legal gun owners. It’s not going to reduce any of the crime because the bad guys don’t follow the rules.’

Josko Kovic, owner of DoubleTap Sports in Toronto, accused the government of having ‘created a panic’ with people ‘now rushing out to buy handguns’.

He added ‘almost all stores are sold out’, including himself.

Another gun store owner, Darryl Tomlinson of Canadian Gun Guys in Winnipeg, claimed the new proposed measure on handguns would ‘take away livelihoods and break up communities’.

The number of registered handguns in Canada jumped by more than 70% between 2010 and 2022, totalling approximately 1.1 million.

Other measures proposed by Mr Trudeau’s government include revoking the firearms licenses of individuals involved in domestic violence or criminal harassment, and permanently altering long-gun magazines so they can only hold up to five rounds.

The proposals follow the mass shooting in Uvalde, Texas on May 24, which left nineteen schoolchildren and two teachers dead. 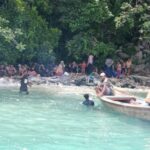 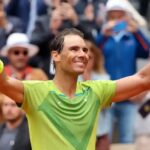