Acting on tip-offs, police waited for the Samui-Sungai Kolok bus at the Narathiwat bus terminal in Mueang district, en route to its final destination.

When the bus, which had left Samui on Monday evening, arrived at the terminal at 5am, police checked the vehicle’s baggage area and found 176 White-rumped Shama birds in 12 cardboard boxes and 81 Black-throated Laughingthrushes in a cardboard box and four baskets.

The bus driver, Pramote Sriphet, 64, and his assistant, Sakol Kruasuk, 29, were arrested on a charge of having protected species in their possession.

The two said they had been hired for Bt1,800 by a person to deliver the birds to a recipient in Sungai Kolok, but claimed they did not know names of the two individuals, police said.

The birds have been sent to the Khok Mai Rua wildlife nursery centre in Narathiwat’s Tak Bai district for rehabilitation, before being released into the wild later. 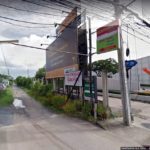 BMA to select 150 sois for promotion as community parks