Million Beer Bottles: The resident Buddhist monks at the Wat Pa Maha Chedi Kaew complex encourage local authorities to deposit any used bottles at the temple which they then use to build new structures.

Having already built the a temple and even shelters, the monks who live in the town of Khun Han really have got into the spirit of recycling.

Sometimes known as Wat Lan Kuad, or Temple Of A Million Bottles, the temple uses the discarded bottles to construct everything from the crematorium to the toilets.

Altogether there are about 1.5million recycled bottles in the temple, and the monks at there are intending to recycling even more.

‘The more bottles we get, the more buildings we make,’ says Abbot San Kataboonyo.

Recycling doesn’t stop at building the temple’s buildings – mosaics around the temple, predominantly of Buddha, are made out of bottle caps.

Besides being ego-friendly, the disused bottles don’t fade, provide good lighting and are easy to clean.

‘The monks at Wat Lan Kuad started collecting the bottles they needed to build their temple complex in 1984,’ said one tourist at the site.

‘They kept this up until they had nearly one million recycled bottles ready to construct their pagodas and temple.

‘Even though drinking is a sin in Buddhism, this still seems like a positive use of beer and lager bottles.’

Representing the cleansing of the human mind, the beer-bottle-temple is now on an approved list of eco-friendly sightseeing tours in South-East Asia. 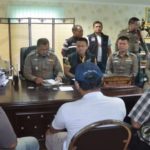 British pensioner robbed of B200,000 by fake Pattaya cop