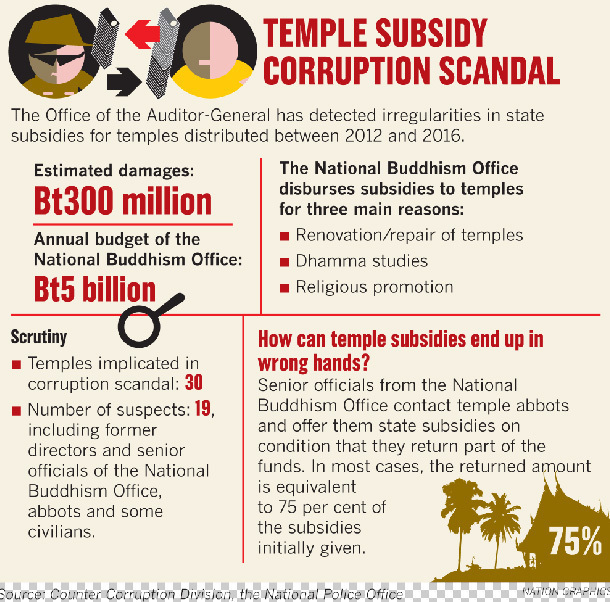 SENIOR OFFICIALS at the National Buddhism Office and their accomplices are accused of siphoning off more than Bt300 million from state subsidies for 30 temples in recent years, according to investigations.

Among the prime suspects are the NBO’s former directors Phanom Sornsilp and Nopparat Benjawatananan. Phanom remains defiant in the face of imminent legal troubles while Nopparat has left the country. “During their terms at the helm of the NBO, some temples were asked to ‘return’ most of the state subsidies disbursed to them,” Prime Minister’s Office Minister Omsin Chiwaphruek said yesterday.

“It’s like if a temple gets Bt2 million for renovation, it’s told to return Bt1.3 million,” Omsin said. The Auditor-General’s Office reported to Omsin last week that 30 temples had been involved in the kickback scandal. By law, the NBO can allocate state funds to temples across the country in support of their renovation and repair, Dhamma studies and religious promotion.
Ads by AdAsia “We have found that some temples received subsidies for Dhamma studies despite the fact that they did not have schools to conduct such classes,” said Pol Maj General Kamol Reanracha, commander of the national police Counter Corruption Division.

Already 19 suspects have been identified. “Of them, five are officials at the NBO and four are monks,” he said. He spoke after his division conducted simultaneous searches at 14 locations in seven provinces in the morning. Armed with search warrants, they raided homes associated with Phanom and Nopparat. Police targeted Phanom on suspicion that he became “unusually wealthy” while serving as NBO director. Gold bars weighing about 1.2 kilograms and worth about Bt1.76 million were found at Phanom’s home along with receipts for shares he had purchased in a cooperative, Kamol said. Phanom’s assets would be listed for the Anti-Money Laundering Office to consider freezing, he said.

A source said Phanom’s assets must have been worth more than Bt100 million as he was found to own land. In February, the National Council for Peace and Order invoked Article 44 of the interim constitution to remove Phanom from his position, saying he had failed to take action against the controversial Dhammakaya Temple. He was transferred to an inactive post at the Prime Minister’s Office. At the home of Nopparat’s mother-in-law in Nonthaburi’s Bang Bua Thong area, police seized a safe to examine its contents. Nopparat moved to the United States about a month ago, reportedly leaving behind “five or six” wives.

The house searched yesterday belongs to the mother of his latest wife, but it has remained unoccupied since he left for the US. The houses of the other NBO officials implicated in the scandal have also been searched. Phanom reported to the Counter Corruption Division at about 3.30pm to seek more information on the case. He is now charged with malfeasance in violation of Article 157 of the Criminal Code and with abusing his authority in embezzling state funds, in violation of Article 147. “No, I’m not worried,” he said when asked by reporters. “I will soon gather evidence to clear the allegations against me.” He said he was linked to the scandal only because he had approved a project during his stint as NBO director.

Pattana Subammartmontr, an academic attached to the NBO, and Narongdej Chainet, chief of the Sing Buri Buddhism Office, are facing the same charges as Phanom. Searches of their family homes reportedly revealed they had significant assets. Souce: Nation News 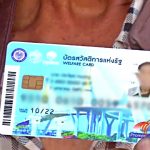