Home » Briton wanted for MURDER in Thailand arrested in Spain 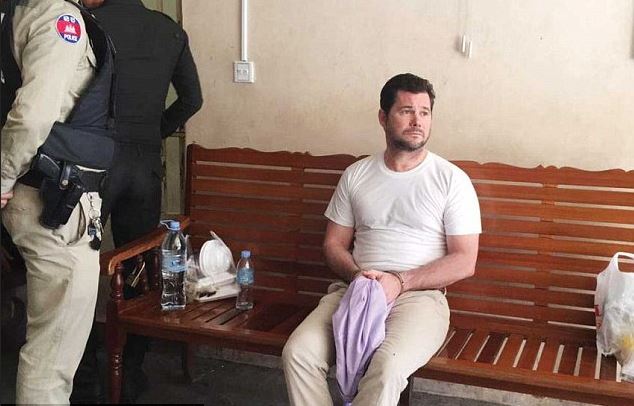 Briton Wanted: Spanish police arrest a convicted British fraudster, 45, wanted in Thailand over the murder of another expat

Spanish police have arrested a convicted British fraudster wanted by authorities in Thailand over the murder of another expat.

Detectives held Toby James Nelhams, 45, on an international arrest warrant as he landed at Malaga Airport.

National Police based in Malaga said the warrant had been issued because authorities in Thailand suspected Nelhams, from Islington, north London, had ordered the murder of a fellow British expat described as the kingpin of a ‘Wolf of Wall Street’-style boiler room gang operation.

Nelhams has previously been linked to the murder of Brit fraudster Tony Kenway although he has never been prosecuted.

The 39-year-old was blasted in the head in a gangland-style hit as he sat in his red Porsche in Pattaya, south Thailand, in January last year.

Dad-of-four Kenway, who boasted about his lavish lifestyle on social media, raked in millions running his own fraud operation targeting savers in the UK and Australia.

Nelhams – one of three men sought over the 24 January 2017 shooting of Mr Kenway, originally from Southampton – was arrested in February last year but was never put on trial.

The other two suspects were identified as a Brit believed to be the getaway driver, named as 28-year-old Miles Dicken Turner from Oxford, and alleged gunman Abel Candeira Bonito, 24, from South Africa. Their current whereabouts are unknown.

Reports earlier this year had suggested Nelhams, jailed for eight months in Cambodia for fraud in September 2017 over a huge clone fraud operation, was no longer thought to be wanted over the crime.

A spokesman for National Police in Malaga said: ‘National Police have held a British man aged 45 on an international arrest warrant at Malaga Airport.

‘The warrant had been issued by authorities in Thailand who suspect him of ordering the murder of a compatriot.

‘The fugitive, whose initials are TJN and was born in Islington, was caught when he tried to enter Spain through Malaga Airport.

‘Officers established his true identity after checks and confirmed he was a wanted man and he was arrested and taken to a police station.

‘According to the arrest warrant, he is wanted for allegedly ordering the killing of a compatriot on January 24 2017, by two people who shot the victim in the province of Chonburi which is home to Pattaya.’

Nelhams is thought to have already appeared before an extradition judge at a court in Madrid following his arrest, although the result of the behind-closed-doors hearing was not immediately clear today.

Earlier this year UK newspapers exposed the vicious Far East turf war between British gangs over savers’ stolen millions which led to the cold-blooded murder of Tony Kenway at the start of last year.

Thai authorities had issued proceedings to deport Kenway, who had been in the country for seven years after moving from Marbella, for working illegally when he was executed.

They said he owned five properties, several high-end cars and businesses and had raked in millions defrauding thousand of victims.

Thai police have described him as the kingpin of a sprawling ‘Wolf of Wall Street’-style call centre scam.

Nelhams has been described as a former business partner of Kenway and it is believed a business conflict led to the murder.

A senior police officer said after Kenway’s murder last year: ‘Tony Kenway had a call centre that employed foreign staff and made calls to Australia and Britain. He had two different companies that were involved in the scam.

‘The aim was to get people abroad to give their life savings. It was not small amounts.

‘He was strong and pushed them for big investments. He promised them a big win. Like winning the lottery.

‘The people who paid the money lost out. It was big amounts, millions and millions of Thai baht that many different people paid to him.’

Kenway posted a picture of Leonardo DiCaprio – who played scammer Jordan Belfort in The Wolf of Wall Street – on his Facebook page on New Year’s Eve before his murder in an apparent reference to the same hard-selling tactics used in the hit movie.