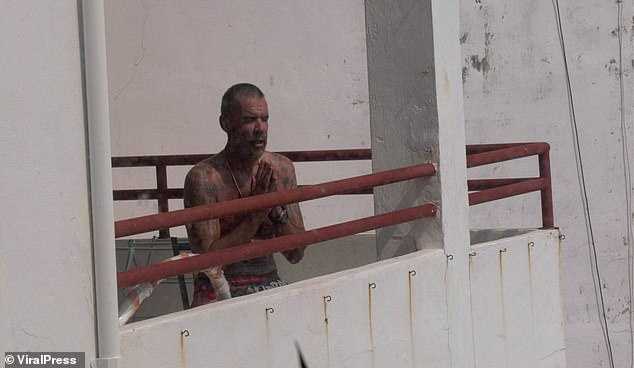 A British tourist has been arrested after allegedly throwing his Thai wife off a balcony after he grew aggravated due to the coronavirus lockdown.

Dave Mitchell, 46, was detained yesterday after his partner, Sukanda, 56, plunged from the seventh floor of the apartment block in Rayong, eastern Thailand.

Paramedics arrived and treated the injured woman at the scene. She reportedly told police that her English husband had thrown her over the balcony while they were arguing.

Sukanda only fell between one and two levels, luckily landing on a protruding roof from a building opposite, which saved her life.

The distressed woman was still conscious and rushed to hospital on a stretched to be treated for her injuries.

Officers then spent more than two hours trying to talk round the bare-chested and heavily-tattooed Brit, who had barricaded himself inside the apartment overlooking the sea.

Mitchell was pictured sitting on the white balcony with his hands clasped together while appearing to pray.

Neighbours eventually helped police to force their way into the room and the man was arrested.

Police said that the injured wife is being kept in hospital after suffering a fractured hip and dislocated arm in the fall.

The Brit told officers that he was stressed because flights back to the UK have been cancelled and he was unable to return due to COVID-19.

He was allegedly agitated at having to stay in the apartment all the time – complying with Thailand’s strict travel ban, 10 pm curfew and closure of bars – so started arguing with Sukanda.

He said: ‘The emergency call was made at approximately 2:30 pm reporting that a foreigner was quarrelling with his Thai wife.

‘They said that the wife fell down from the condo on the seventh floor and was badly injured, while the foreigner was on the balcony and suffering with insanity.’

The police chief said that they found neighbours in the apartment block to communicate with the Brit and after two hours he started to relax.

Police Major Narongsak added: ‘The English man said that he started arguing with his wife because he was stressed that he was locked down and could not go back to the country because of the pandemic.

‘Police officers detained the suspect at the Ban Chang police station and waited for him to calm himself before investigating and collecting evidence for further proceedings.’

Incoming passenger flights were banned this month and the ban has been extended until the end of May. Several flights have been available sporadically for stranded Brits to return home, but once they leave they are not able to get back into Thailand indefinitely. 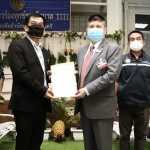 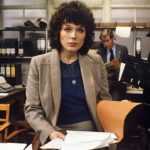