A British tourist who claimed he was kidnapped, robbed and had his legs broken actually injured himself when he jumped off a hotel.

Mik Laverty, 50, and wife Denise from Newton Aycliffe, County Durham, were appealing online for £10,000 (43,000 baht) after claiming that he was attacked.

It was reported that Mik, an ex-serviceman, was waiting outside a bar for his wife to pop inside to use the toilet when he was kidnapped, robbed at gunpoint, had his legs broken then mysteriously taken to hospital.

All in the middle of a busy Phuket street, no less. There were too many holes in the story and when police received a report of the incident on Saturday from Denise, they went to investigate.

But when they spoke with hotel staff where the supposed attack happened, there were contradictions with Mik’s story.

They checked the CCTV and saw Mik bizarrely jumping off a seven metre high hotel balcony. That’s when he was found screeching in pain by staff at the Thara Patong Beach Resort & Spa.

Police weren’t having any of Mik’s porkies and didn’t take it any further. It would have been forgotten about, had it not been for the couples GoFundMe page.

That was picked up by British papers and when press in Thailand contacted the police, the real story soon became clear.

Dammning CCTV footage shows the moment Laverty throws himself off the hotel balcony. Strangely, he had been trying to open doors before.

Perhaps he was looking for a toilet. Either way, he has the couple seem to have left Thailand in a hurry and settled their medical bills.

Police went to the Bangkok Phuket Hospital to interview Mik again but he had already left. Immigration documents also showed that he had left the country on a plane bound for Dubai at 9.22am.

Police said they were powerless to take further action against the couple. 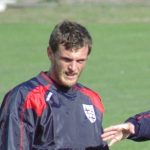 Footballer killed in Bali after getting struck by lightning while surfing 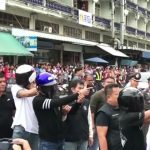