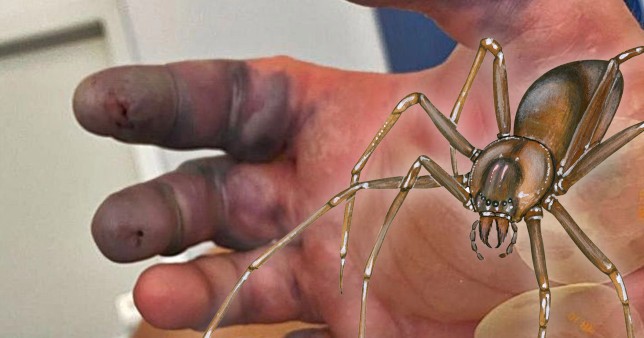 Disturbing pictures show a British teenager’s fingers purple and swollen after a spider bit him on holiday.

The young man, 19, faces losing two of his fingers after the nightmare incident unfolded in Ibiza.

He was watching the sun go down at a beach, thought to be San Antonio, when he felt the bite.

Speaking to Diario de Ibiza, he said: ‘I sat on some steps and felt something and stung me but I didn’t think anything of it.

‘I woke up at 5am the following morning because my hand was burning and was swelling up.’

He was given an injection at a local health centre but was rushed to Can Misses Hospital when his hands continued to swell and change colour.

Doctors told the terrified tourist they had ‘never seen anything like it’ as he was put on a drip.

Medics remained mystified until two weeks of tests showed he had been bitten by a brown recluse spider.

What are brown recluse spiders and are they in the UK?

Brown recluse spiders are normally only found in south and central United States – but they have been discovered in the UK on rare occasions.

Abbie Kinnaird, 8, was left with a hole in her hand after one dropped from the ceiling to bite her at her house in Essex in 2016.

A man named Henry Moffett almost died when one sank its fangs into him as he watched the football in London.

The species are typically sized between 6 and 20mm. They are light to medium brown, although they can vary in colour from whitish brown to blackish grey.

A bite from them is initially painless but can develop into lesions which tend to be red, white and blue patches.

In severe cases, this can turn into gangrene, with the victim suffering a large open wound.

Most brown recluse spider bites take about three weeks to heal but serious cases can take two months or longer.

Bites from them can cause necrosis which can lead to gangrene, a serious condition where a loss of blood supply causes body tissue to die.

The unidentified man, who has now returned to his home in Wales, is now waiting for his hand to heal so he can undergo surgery to amputate two fingers and part of another.

He said: ‘Millions of people go to the same place every year to see the sunset and nothing ever happened to them before me.’

It comes after another young student escaped death after being bitten by a venomous spider during a staycation in the UK.

Abby Tannnetta, 18, had to have emergency surgery to avoid sepsis setting in.

After recovering, she said: ‘People always say that spiders won’t hurt you, that you’re much bigger than them, but this shows they can. You just don’t think it will happen to you until it does.’ 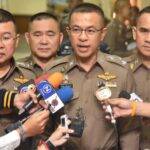 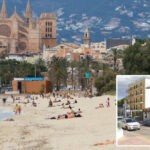 British woman ‘raped as she lay unconscious on street