Last Tuesday Switzerland and Denmark drew 3-3 in a European Championship Qualifier. Nothing too unusual about that except for two things. Switzerland were winning 3-0 after 76 minutes and Højbjerg joined the action as a 70th minute substitute with Christian Gytkjær who’s a striker with Polish club Lech Poznań. Gytkjær scored Denmark’s second. Højbjerg didn’t score but played a big part in dragging Denmark back into the game.

Saints boss Ralph Hasenhüttl soon recognised Højbjerg’s fighting qualities. He made him captain and against Brighton, Højbjerg put in a lung-busting battling display. He also scored the winning goal after 53 minutes.

Højbjerg broke up Brighton’s play close to the halfway line and fed Nathan Redmond. Redmond headed for goal with Højbjerg just outside him. In the box, Redmond found Højbjerg who scored with a right foot shot with the outside of his boot.

For Brighton Martín Montoya cracked a left-foot shot, from outside the box, which smashed against Southampton’s bar in the 72nd minute. But that was the closest they came.

Southampton, for the second game running, held on to their slender lead to take the points.

Man of the match: Nathan Redmond 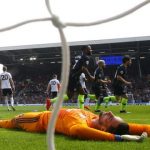