Home » Bombings mark the start of Ramadan in Thailand

Incidents of a bomb explosion and shootings greeted residents in restive southern Thailand when Muslims observe the first day of fasting during the month of Ramadan.

As Muslims prepare for the first day of fasting, a bomb went off in Songkhla injuring five policemen on duty while in another incident there was an exchange of fire between security forces and an armed group in Pattani.

In the first incident, five policemen were injured in a bomb explosion in Kg Khuan Ran in the district of Tepa, Songkhla

In the incident at about 12 midnight, five police personnel who were returning after inspecting the house of an assistant village head, were ambushed by a group of unidentified individuals.

“Three of the five policemen were seriously injured and were being treated at Songkhla Hospital,” he told reporters.

Meanwhile, in Pattani, an exchange of fire between security forces and an armed group took place in Kg Mananjung, Tung Yang Daeng, at about 10am local time.

There were however no casualties reported.

Fourth Division Army chief Pornsak Poonsawat ordered all troops to be prepared for battle and to track down the armed group.

He said the shooting incident is believed to be over the death of an armed group member in Nong Chik, Pattani on May 3.

“We believe members of an armed group were injured in the exchange of fire today as blood stains were found.

“We will be stepping up efforts to track down the group,” he said 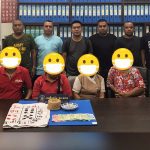 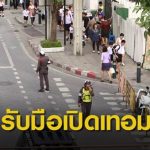