The body of a murdered worker was found floating on the surface of a reservoir in Chon Buri’s Phan Thong district Sunday evening, police said.

The body of Yongyuth Junmud, 35, was discovered by residents of Moo 5 village in Tambon Nong Tamlueng at 6.50pm Sunday.

His uniform, found on his motorcycle left at the edge of the reservoir, showed he was employed at Mitsubishi Turbo on the Amata City industrial estate.

His head had been smashed in with a hard object. A strip from his t-shirt had been tied around his neck and attached to a rock weighing about five kilogrammes. His legs were also tied.

A doctor determined he had been dead for about two days. 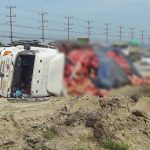