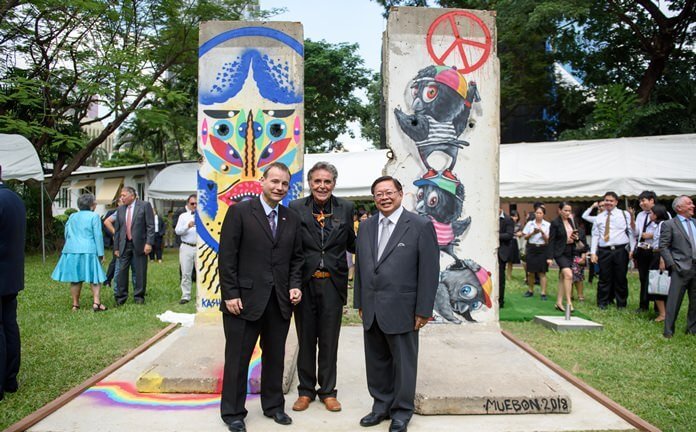 A ceremony was held on 12 November to unveil two segments of the infamous Berlin Wall at the German Embassy in Bangkok.

H.E. Schmidt gave a moving speech about the history of the wall and how much pain and suffering it had caused the people of Germany.

H.E. Virasakdi Futrakul, Deputy Minister of Foreign Affairs of the Kingdom of Thailand, was guest of honour and spoke emotionally of the most unfortunate years in Germany’s history.

Berlin entrepreneur and Pattaya resident Axel Brauer was the brainchild behind this project. He personally sought out and acquired the wall segments and shipped them to Thailand to be donated to the German Embassy in Bangkok.

Axel spoke of the momentous days during the blockade and how the Luftbrücke (Berlin Airlift) brought food and supplies to the people of West Berlin in 1948-49.

He narrated true incidents of his life when the East Germans started building the wall in 1961 and the day when it came crashing down in 1989.

The inscription on the commemorative plaque reads: “These original segments of the Berlin Wall are reminders of the peaceful revolution in the former German Democratic Republic, the fall of the Berlin wall on 9 November 1989 and the reunification of Germany on 3 October 1990. They symbolize admonition, freedom and peace.”

As part of the STREET festival 2018, three young artists, Mue Bon (Thailand), Kashink (France), and Julia Benz (Germany) were commissioned to paint the segments the way they envisioned the significance of the wall to the younger generation.

The Berlin Wall now stands in the grounds of the German Embassy, Bangkok, as an everlasting memorial of the grim days in German history.