A deal to restore Qatar’s beIN Media channels in the United Arab Emirates was reached late on Sunday, according to a source with knowledge of the negotiations, restoring the ability of thousands of fans to watch World Cup games live.

Subscribers to telecom company Du in the UAE also confirmed they were once again receiving pictures from the giant Qatar sports broadcaster after channels were blocked for more than 24 hours.

“A deal has just been signed and programmes are back on Du,” said the source on condition of anonymity.

Earlier on Sunday, beIN said “lengthy” talks had broken down and their programmes would not be carried on Du — including games from the upcoming World Cup.

Du is one of only two telecom companies in the UAE — the other being Etisalat — to show channels from beIN, which has exclusive rights to show all 64 World Cup matches live across the Gulf.

Services to Du had been interrupted since Saturday, with the UAE firm saying the blank screens were the result of action taken by beIN.

The contract squabble came not only less than a fortnight before the World Cup starts but also on the eve of the one-year anniversary of a diplomatic dispute between the countries, raising tensions between Doha and Dubai.

A group of countries including the UAE cut all ties with Qatar on June 5, 2017, accusing Doha of supporting extremism and being too close to regional rival Iran. Qatar denies the allegations.

In the immediate aftermath of the diplomatic crisis beIN channels were blocked in the UAE, but were back on air by July last year.

And as well as ongoing political tensions, beIN says its channels are being pirated in a sophisticated operation across the region, with pictures broadcast illegally by a company called beoutQ.

The source earlier told AFP that the dispute with Du had been caused by ongoing commercial negotiations over TV carriage rights, and had nothing to do with political tensions or pirating claims. 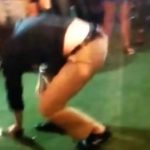