Home » Bear-exit! Border frustrates wild brown bear as it struggles to cross border into the EU

This is the moment a brown bear was thwarted by a border fence in its attempts to enter the European Union.

The brown bear (Ursus arctos) was caught on CCTV cameras rummaging for food on the border between Belarus and Lithuania when it came across the metal fence.

Clearly seeming to think that richer pickings were to be had in Lithuania, a member of the EU, than Belarus, which is not, it seemed determined to cross.

But the bear was unable to climb the fence, or go around it, and ended up sitting glumly while gazing at the forbidden fruits on the other side.

The State Border Guard Service shared the video on its Facebook page with the comment: “The only way we let people from Belarus to Lithuania is through check-points.”

While ‘Rimantas Narušis’ added: “It’s a lot harder to go look for mushrooms these days due to this fence, but I bet it doesn’t cover the entire border, does it?”

The Belarus–Lithuania border is almost 680 kilometres (422 miles) long and serves as an outer border between the European Union and the Commonwealth of Independent States.

The Commonwealth of Independent States, also nicknamed the Russian Commonwealth, is an intergovernmental organisation between post-Soviet republics. 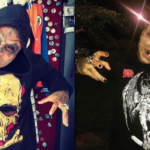