Home » BANGKOK RESIDENTS WRAP UP DUE TO 16 C

BANGKOK RESIDENTS WRAP UP DUE TO 16 C

Many Bangkok residents had to wrap up against the cold on Tuesday as winter temperatures dropped to below 16 degrees Celsius.

The Meteorological Department reported that the average temperature in Bangkok was 17C on Tuesday morning with the Don Mueang district the coldest at 15.5C.

Many Facebook users posted photos of themselves wearing jackets and other layers of clothing against the cold. Others said they were reluctant to leave their homes because of the low temperatures.  Source: Asia Nation

CHAINAT COVERED BY FOG TO FOLLOW UP WITH 2C to 4C 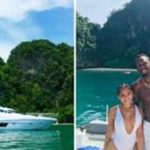 BOLT ON A BOAT ‘MAYWEATHER’ YACHTS IN PHUKET WITH GORGEOUS LADY