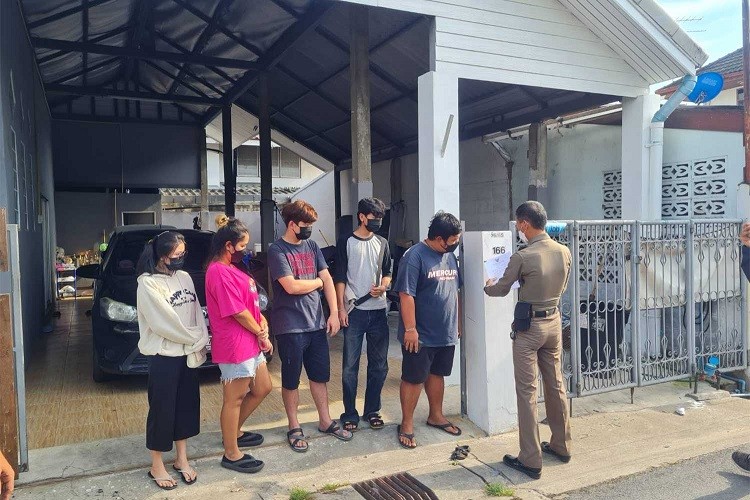 Two more people accused of recruiting unemployed Thais to work for a phone scam gang in Cambodia have been arrested by police, in Sa Kaeo and Bangkok.

One allegedly provided accommodation at her house in Sa Kaeo for recruits before they were smuggled across the border to Cambodia.

The Bangkok arrest also led to four other people being caught for operating gambling websites from the same house.

Ms Rungruedee was detained when police stopped her pickup truck on a bypass road in tambon Ban Mai Nongsai of Aranyaprathet district, Sa Kaeo, on Friday morning. During a subsequent search her house in Khok Sung district of the border province they impounded two mobile phones and seven bank account  passbooks as evidence.

The house was allegedly used as a waypoint  for job-seekers she allegedly lured to work as phone scammers, before they were taken illegally across the border to Cambodia, Pol Gen Damrongsak, a deputy national police chief, said.

During questioning, Ms Rungruedee allegedly confessed to the charges and said that a Cambodian man paid her 1,000 baht per head to send the recruits to Cambodia.

Checks on people linked to her revealed her boyfriend Boonyang Silsattha and his elder brother Sakchai Silsattha were arrested in Khok Sung district of Sa Kaeo in May for the same alleged offences. She allegedly confessed she had taken over the work after they were caught.

Mr Phongthana denied being a close associate of Atthachai Meepho, 30, but admitted the man had paid him 1,000 baht per head to help people illegally cross the border to Cambodia. He said he was not aware that they were being sent to work as phone scammers.

Mr Atthachai was arrested in Sa Kaeo on Thursday, also for allegedly sending people to work as phone scammers in Cambodia. His arrest led to the apprehension of Ms Rungruedee and Mr Phongthana.

The two latest arrestees were handed over to Samut Prakan police for legal action.

The house where Mr Phongthana was arrested was found to also be used as an office for five gambling websites. Four young people,  two men and two women, were arrested and two computers, one notebook computer, six computer monitors and four mobile phones seized as evidence.

Phongthana Phimpha, 36, next to the police officer, is arrested, along with four other suspects charged with running gambling websites  from the same house  in Bangkok. (Photo supplied: Wassayos Ngamkham) 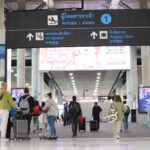 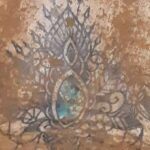