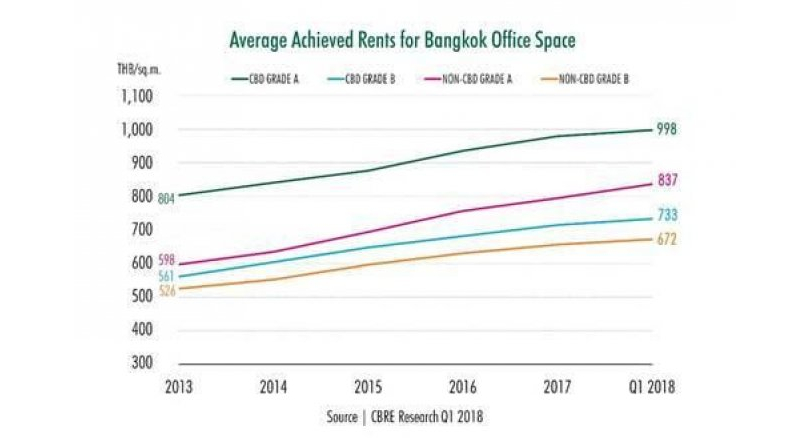 Grade A Central Business District (CBD) office rentals in Bangkok rose by 3.1 per cent year-on-year to new record highs in the first quarter of 2018, and the trend is expected to continue, according to international property adviser CBRE Research.

Average rents for Grade A buildings in the CBD were just under Bt1,000 per square metre per month and a new record of Bt1,500 was achieved at Gaysorn Tower, CBRE reported.

The total take-up was 65,000 square metres in Q1, up 15.1 per cent YoY, led by the completion and owner occupation of the new Bank of Ayudhya Building (Krungsri Ploenchit Tower) on Ploenchit Road and Thai Rath’s new building on Viphavadi Road.

The overall vacancy rate fell to 7.3 per cent and is expected to remain low for the next three to four years.

Around 750,000 square metres of office space is under construction, including the first phases of One Bangkok and The Parq, both on Rama IV Road, with completion dates between now and the end of 2022.

CBRE forecasts that demand will match supply for the next three years.

The direction of the market from 2022 onwards is harder to predict. There are potentially around two million square metres of office space being planned on sites acquired by developers, but construction has not yet started.

“Globally, there is a trend for some companies choosing to acquire office space as a service from co-working space operators rather than commit to lease and incur a capital expense in fitting out,” said Roongrat Veeraparkkaroon, director of advisory and transaction services at CBRE Thailand.

“Co-working space is not just aimed at startups, and co-working space operators will be competing with landlords offering offices on traditional lease terms.”

Despite this disruptive change in the leasing market, CBRE forecasts the net take-up in 2018 will be similar to that of 2017.

Some of the key new office developments that will be completed in 2018 are the 60,000sqm Singha Complex at the Asoke-Phetchaburi intersection, the 40,000sqm MS Siam at the Rama III-Industrial Ring Road intersection, the 22,000sqm T1 Building at Thonglor BTS station, the 6,000sqm Ladprao Hill at Lat Phrao MRT station, and the 5,000sqm Summer Hub at Prakhanong BTS station.

First ANA A380 rolls out of assembly hangar