Home » Over 3,000 vehicles in Bangkok inspected for black smoke

The Pollution Control Department (PCD) reported that more than 3,000 vehicles have been inspected for exhaust fumes which might exceed the safety limits in Bangkok.

The officials have issued an order temporarily prohibiting the use of vehicles with black smoke exceeding the standard value for 30 days.

The PCD Director General reiterated that drivers can fix and improve their vehicles then have officials inspect them in order to revoke the order 30 days from the date of issue. 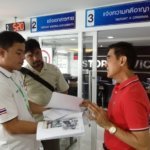