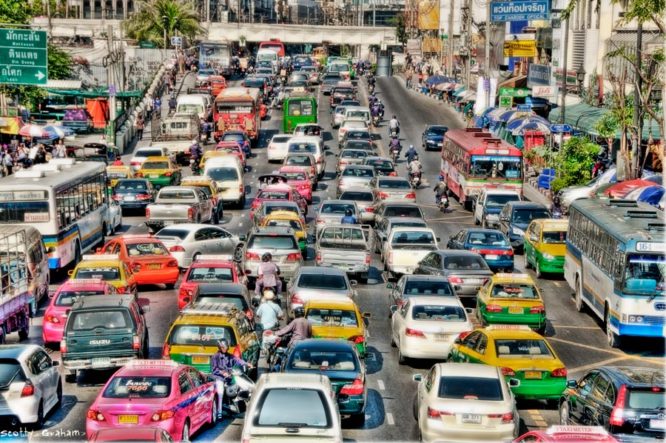 Bangkok is considering a congestion charge for vehicles and a study is being carried out on the feasibility of implementing a new scheme.

If implemented the money gained would be used to pay for improvements in traffic and public transportation in the capital.

It is also being seen as a move to encourage more use of public transport in the city.

At present the idea is that your car would be filmed as it entered the congestion zone – then you would get a bill at the end of the the month.

Similar schemes operate in cities like London where it is called a congestion charge.

Sanook quoted news organisation Bangkok Insight as reporting that Sorawut Songsirilai of the Telecommunications Ministry had commissioned the study that was expected to report its findings by the middle of this year.

Initially it would likely concentrate on the Asoke/Sukhumvit area of Bangkok – an area well served by existing public transport, said Sanook, but notoriously badly congested.

CCTV cameras would catch the license plate of private cars whose owners would then be billed at the end of the month.

Public transportation vehicles such as buses and taxis, for example, would be exempt.

There is no word as yet as to how much the charge might be.

Money gained in this way would be used to improve infrastructure for those living and visiting the area.

Tourists ‘threatened with death penalty’ for selfies on Thai beach