The baht opened at 33.59 to the US dollar on Tuesday, weakening from Wednesday’s closing rate of 33.50

The Thai currency is likely to move between 33.45 and 33.65 during the day, Krungthai Bank market strategist Poon Panichpibool predicted.

Poon said that the baht might continue to weaken in the short term if it weakens over the key resistance level of 33.50 to the US dollar.

The flood situation pressured investors to sell Thai stocks as they were afraid that it could be as bad as the 2011 floods. Meanwhile, the Asian market was in a risk-off state due to the Evergrande crisis.

The baht might also be pressured by importers buying the dollar in the short term or at the end of the month.

Gold investors might buy on dips when gold price is US$1,750 per ounce.

Investors, especially in the US, are in a risk-off state after US Federal Reserve officials signalled a decrease un quantitive easing soon as the economy was recovering and the inflation was at a high level longer than expected.

He said Fed officials did not signal increases in interest rate.

He added that the market was pressured by the Evergrande crisis as the company did not pay interest to investors on September 23. The market is keeping an eye on the end of this month and the beginning of next month when the company will have to pay interest of US$193.3 million. 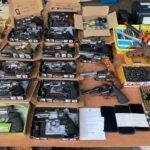