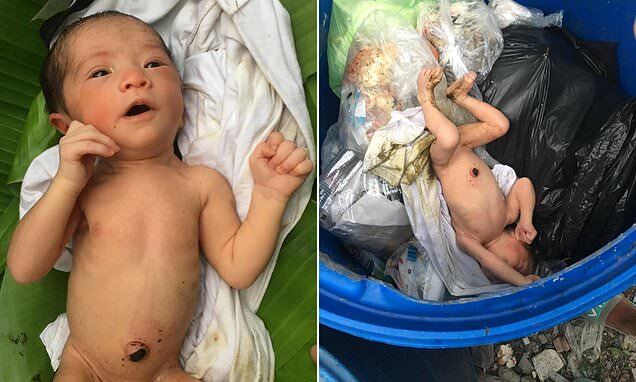 A baby girl was rescued after being stuffed inside an old hairdryer box and dumped in a bin.

The infant – believed be to one week old – was buried inside the pile of rubbish in an alleyway in Bangkok, Thailand, on Saturday evening.

Resident Maneerang Phangmam, 32, was collecting old bottles to be recycled when she peered inside the purple box and noticed the baby.

She said there was a white cloth wrapped around her and the cardboard box had food and rotting vegetables dropped on top.

The girl was not making any noise and was upside down but miraculously, she was still alive.

Maneerang yelled for help and several neighbours appeared to call the emergency services.

She said: ‘I had finished work and I was collecting bottles when I saw the hairdryer box. I wanted to see if their was anything valuable inside, then when I looked I saw the little baby girl.

‘I was frightened and didn’t know what to do. I just shouted for help and said ”there’s a baby here, somebody call the police and an ambulance”.’

Paramedics from the local rescue foundation arrived and took the girl into an ambulance where she was given oxygen while being cleaned.

Ambulance driver Piyapong Kanjan said the baby was recovering after being dumped in the Khlong Sam Wa district of the Thai capital.

He said: ‘We think she is about one week old. She has been taken to the Nopparat Rajathanee Hospital where nurses are caring for her.’

Police are now interviewing residents in the street where the abandoned baby was found.

Colonel Thanusorn Krittiyachot said: ‘The station was notified at 6.20 pm of the baby found in the alleyway. We arrived with rescue officials to inspect the scene.

‘We will inquire with people who live and work in the alleyway to check if they saw anybody leave the baby.’ 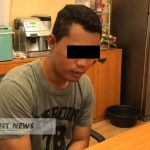 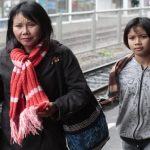 Winter starts THIS WEEK and will be COLDER than ever